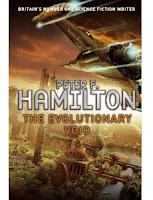 From Forbidden Planet's press release, and another date for your diary:


Described by the Guardian as ‘the master of widescreen baroque’, Hamilton is one of Britain’s most respected science fiction authors whose work includes the highly successful Pandora’s Star. He has also written the Judas Unchained and the Greg Mandel and Night’s Dawn series.

Completing the epic and massively acclaimed Commonwealth Saga that unfolded in The Dreaming Void and The Temporal Void, Peter Hamilton’s startling perspectives on tomorrow’s technological and cultural trends continues to be both compulsive and wonderfully readable. Spanning huge tracts of space and time, his stories are as epic in scope, and yet they are always grounded in characters – human, alien and other – who touch our hearts and fire our imaginations.
Posted by Alchemy Press/ Peter Coleborn at 7:42 PM

Alchemy Press/ Peter Coleborn
British independent press: The Alchemy Press, run by Peter Coleborn. I have edited and produced titles for the British Fantasy Society (including Dark Horizons, Winter Chills and Chills). I have chaired both the BFS and the annual British Fantasy Convention. I write fiction, reviews, edit manuscripts (including line edits) for other writers, co-created and chair a writers' group. In 2009 I sat as one of the judges for the prestigious World Fantasy Awards ... And I also take photographs.

All copyright remains with individual authors, artists and publishers