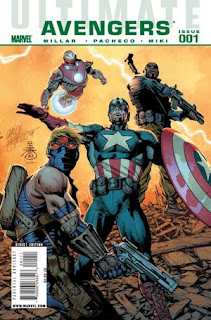 Ultimate Avengers: The Next Generation by Mark Millar and Carlos Pacheco. Marvel £12.99
Reviewed by Peter Coleborn

I stopped reading Marvel comics long ago, when cloning became common place in order to bring back a killed-off hero or villain – that and introducing alternate versions of characters and, worse, their pretending to be dead. It led to sloppy story telling; it irritated me that there were no consequences to actions. Then Marvel introduced the Ultimate Universe and started to tell the stories all over again, more-or-less from scratch. Unfortunately, these tricks have appeared again. I just wish that when someone has been killed, they stay dead; I wish the writers would learn to live without certain characters.

In the preceding arc, Magneto reversed the Earth’s polarity leading to catastrophic weather conditions, including a tidal wave in New York that killed thousands, if not millions. Among the dead were members of the X-Men and some of the Ultimates (aka The Avengers in the regular Marvel Universe). Giant Man died. The Wasp died. Wolverine died. The Black Widow had also died in an earlier story, killed by Hawkeye.

Now, another menace appears and a new team of heroes is required. Not the remnants of the Ultimates, but another team – so enter The Avengers. Nick Fury, who’s trying to redeem previous antics of his, leads this group. And in his team are new versions of The Wasp, The Black Widow, an alternative Iron Man (Tony Stark seems to be permanently drunk; and there’s also Stark’s brother: did you know he had a brother?) … and a cloned version of The Hulk (who has Banner’s brains and the monster’s brawn).

(After the wave, Magneto was killed – wonder how long it is before they bring him back.)

The new menace? The Red Skull. In this version, he is the— No, that would be telling. The Skull has purloined the Cosmic Cube from the ruins of the Baxter Building – which is, potentially, the ultimate weapon. So The Avengers must retrieve the Cube and arrest Captain America, who has gone berserk when he learns the Red Skull’s secret.

You probably get by now that I’m not a big fan of the replication process (however it’s done). But once I got my head past that, I have to say that Mark Millar has written a dynamic script, embellished with clean lines and colours by artist Carlos Pacheco and colourist Justin Ponsor. The graphic novel appears to have been inked by a team of people. Okay, I’ve discovered that I am still a soft touch for super-hero comics (well, the graphic novels, anyway). I enjoy their brevity, their speed, their excitement – for all their faults. This volume comprises issues one to six of the monthly title.
Posted by Alchemy Press/ Peter Coleborn at 6:35 PM

Damn it, Peter, you are tempting me too much with this graphic novel, especially when I have resisted the call of books like this for so long.

Comics have moved a long way since I used to read The Fantastic Four and Spider Man back in the sixties!

In this Marvel universe, Stark needs to be drunk to take away the pain of his extra-sensitive skin (you have to read earlier stories to get all this). Since Magneto's wave destroyed NY he seems to drink a lot more. Read Armour Wars to see more of Tony Stark. Of course, it looks as if Robert Downey Jr modelled his Iron Man on the Ultimates version rather than the all-American good guy you probably remember.

Actually, I love Robert Downey Jr's version of Stark. Then again, Downey Jr is a brilliant actor, who adds that spark to whatever role he plays. Funnily enough, too, I like the idea of a superhero with a drink problem. In reality, that wouldn't be too difficult a situation for such a person to get into, considering all the perils they would have to face in their day to day life!

Alchemy Press/ Peter Coleborn
British independent press: The Alchemy Press, run by Peter Coleborn. I have edited and produced titles for the British Fantasy Society (including Dark Horizons, Winter Chills and Chills). I have chaired both the BFS and the annual British Fantasy Convention. I write fiction, reviews, edit manuscripts (including line edits) for other writers, co-created and chair a writers' group. In 2009 I sat as one of the judges for the prestigious World Fantasy Awards ... And I also take photographs.

All copyright remains with individual authors, artists and publishers